Last night marked the end of a very big chapter in my life. Along with 25,000 fans we all sang along for the very last time with, in my opinion, the greatest band ever. That might come across as an exaggeration to some folk but to me it is not. I can’t remember how old I was when I first heard Runrig but I was still only in primary school when I was given a copy of “Long Distance: The Best of Runrig” and from then on I was hooked. I had never heard Gaelic songs sung and played like that before. All I did then was pretend to be Donnie Munro and sing along with the album and play air guitar in my bedroom.

When I left home to go to music school in Plockton the only songs I new were Runrig songs. I wasn’t into folk music then and it always seemed strange to me that not everyone else was into Runrig the same way I was. Thankfully in Plockton a good friend of mine, Colin, was also a big fan and we would listen to albums and sing their songs together. Whenever we had a trip away with the school in the mini bus we would always sing “The Summer Walkers,” a brilliant song that I never got to hear live but I always loved to sing.

For me, Runrig was not just a band, they were my greatest inspiration. When Runrig played at the Hebridean Celtic Festival in 2005 that was the moment I realised that I wanted to be a musician and perform on that stage like they did. The atmosphere that night was amazing. I cant think of a better venue for a gig than the “big blue” and hearing Runrig at home was always the best.

I am so lucky to be able to say that I am now a full time musician and since I was 18 I have toured all over the world and there is no doubt in my mind that it is all because of Runrig. There are a lot of divided opinions on bands and their music in my line of work however, many people don’t realise that Runrig have had such an immense impact on the folk scene and our ability to pursue successful careers as professional musicians. No band has come close to achieving what they have and I don’t think any other band will. They took Gaelic music and culture all over the world and its amazing to see the evidence of that when I travel to festivals and gigs all over the world. I can honestly say that I have never once done a gig in America without there being at least one or two Runrig fans there. I also usually get handed a piece of paper before or during gigs from an audience member asking if I can sing Alba or Loch Lomond.

In terms of Gaelic as a language I can’t imagine what it would be like right now had it not been for Runrig, and for me that is the truth. I teach Gaelic in Fife and most of my students have said that their reason for learning the language is either through music or a family member who once had Gaelic. Music for me is the key to Gaelic’s popularity at the moment. For me there is no better way to teach it or get folk interested in it than through song and that’s what Runrig did. I love going to Germany and having German fans come up and speak Gaelic to me. I’ll ask them how they got into it and they all say the same thing. They wanted to be able to sing along with Runrig. How amazing is it to think that a band from the islands became such an inspiration for folk wanting to learn our language.

Since being a musician I always wanted to be in a band like Runrig. As a singer, Runrig songs connect to me like no other. That’s why the band was so special to me. It can be very hard sometimes to relate to a song when you haven’t written it yourself but I never had that problem with Calum and Rory’s songs. In my mind, they are two of the best songwriters ever. Their songs in Gaelic and English had a way of connecting to so many people and that was the key to their success. It was hard to only record two of their songs on my first album as I could’ve easily made a whole album of Runrig songs that I love.

Since joining Skipinnish I have gone on to do so many things that I wanted to do, like playing to a sold out Barrowlands and sharing the stage with the greatest guitar player in the world. Malcolm Jones has been my musical hero for as long as I can remember. No one can play guitar the way he can and also get the feel for each individual song the way he can. I met Malcolm for the first time in Plockton when he came to visit and do a workshop for us. I was so happy when Dougie asked me to show him and Donald Black around the place. I got chatting to Malcolm and when I told him that guitar was my second study at the school, he asked if I wanted a shot of his guitar. When he passed his lovely electric guitar to me I just panicked. I had only been playing guitar for over a year and had no idea what to play. The only tune I could play at the time was one of his own from the album “Stamping Ground,” possibly my favourite Runrig album, called “The Engine Room” so I nervously played it for him.

I never thought that I would get the chance to play with Malcolm on stage and when I did it was the best feeling ever. To share a stage with your hero is the most amazing feeling and to see how he goes about things before and during a gig was also inspiring. It was hard to see how emotional Malcolm got at the end last night and it brought a lot of other folk, including myself, to tears as we knew this was the very end. When you have 25,000 fans singing one of the greatest Runrig songs ever you can’t help but get emotional. It must be so hard to say goodbye to something that has been part of your life for 40 years. People often ask me what the best thing about performing is and I have always had the same answer. There is no greater sound than hearing an audience sing your songs along with you. Hearing everyone singing Hearts of Olden Glory is enough to bring everyone to tears.

Being a Runrig fan was more than just following a band, it was being part of an amazing community of music lovers. I honestly think that Runrig have the best following of any band. The distance folk travel to see them live is just amazing. Last night I couldn’t walk 10 feet without bumping into someone I knew. I don’t think anyone was left up in Lewis. Going to the Barras each year to see them was the highlight of the year for me. It was great when all your friends and family came down to Glasgow to meet up and go to the gig with and you got to see the same faces year in year out.

You often hear folk say, “you’re the next Runrig” but the truth is no one will be. Bands will continue to sing their songs and I’m sure there will be a few tribute bands emerging now, but no one will ever come close to sounding or being like Runrig. That’s because it’s not just about the music. It’s about the individuals in the band and what they create when they come together. They are all amazing people and I look forward to seeing what they all do next.

For me I can’t thank them enough for the opportunities they have given me and countless other musicians in Scotland to succeed in the music industry. It’s hard to think that we will never hear the songs being sung by Runrig again but the best thing about music is that it will stay with us forever. The Last Dance in Stirling was the best gig I have been to and it was just amazing to share that night with everyone else. You can’t erase the songs they have written and performed for us and I know I’ll keep performing them until I’m old and grey. To finish with, I played around with an old Gaelic proverb that I sent to Calum MacDonald when I first heard about the Last Dance as I wanted him to know how much his songs meant to me and thousands more.

The world may come to an end but love and Runrig’s music will endure!! 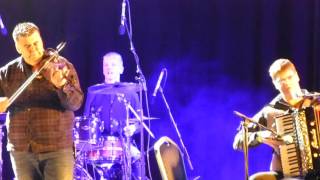